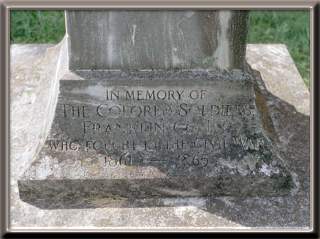 Monument erected in 1924 honoring the US Colored Soldiers from Kentucky
Source: Trails-R-US Monuments
In 1924, The Colored Women's Relief Corps, No. 8 of the Grand Army of the Republic, erected a monument honoring the actions and service of the US Colored Troops, particularly those from Kentucky. It was placed in Greenhill Cemetery in Frankfurt Kentucky. In April of this year another an historical marker honoring black Civil War soldiers of Kentucky was erected.  This marker stands in Simpsonville Kentucky near the site where soldiers were killed. I have also been impressed to see that over the years there have been more efforts to honor black soldiers from Kentucky.

Source of Image: Dedication and Unveiling of Simpsonville Marker


There were many black men from Kentucky who served in the Union Army, and many served in regiments outside of Kentucky. It is said that more than 20,000 black men of Kentucky served in the Union Army from multiple states. Kentucky is an interesting state with rich African American history. The Civil War was also a time in which there was much activity involving African Americans. Black Union regiments were organized, and the slaves---many freed themselves and found refuge at contraband camps like Camp Nelson. 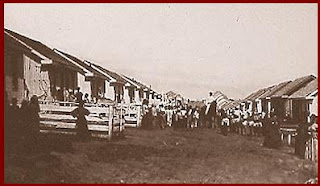