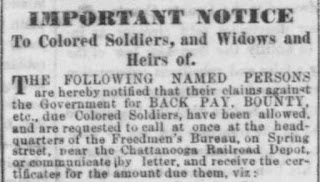 In July 1867, the Bureau of Refugees, Freedman and Abandoned Lands also known as the Freedmen's Bureau, served communities in several fields offices in the state of Tennessee. In records from McMinnville Freedmen's Bureau office, it was a surprise to stumble upon a fascinating article from a daily newspaper from Nashville Tennessee, that had been clipped and put among bureau papers.

The Nashville Union and Dispatch was a daily publication, and the names of several dozen soldiers who served in the United States Colored Troops who were owed pay for their service was noted. If the soldier who enlisted did not survive the war, their widow, or heirs were called to step forward and make their claim.

Most documents from the Freedmen's Bureau itself are usually original hand written articles reflecting day to day business of the various offices. They often contain contracts, letters, complaints, marriage records and so much more. The notations are made by the staff that worked in the Bureau itself. What a surprise to find a clipping from the Nashville newspaper included among the papers from the McMinnville Tennessee field office. 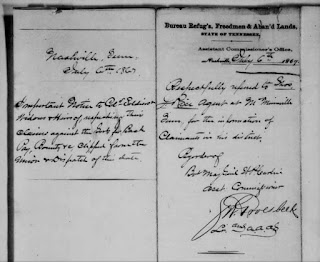 The edition came from the July 6th issue of the Nashville Union and Dispatch. I was able to locate the exact edition from which the article was clipped. The notice appeared on page 2 of that edition, and the entire edition of the publication is contained on the Chronicling America site hosted by the Library of Congress.

Zooming in on the article for a much closer view, the names of the soldiers and qualifying widows are more visible and more easily read. I was impressed to see a list of names of black Union Army soldiers in the Nashville publication and found it surprising to have stumbled upon it among Freedmen's Bureau papers.

An Unexpected Surprise
A second surprise came when glancing through the list of names and finding the name of an ancestor, a great great uncle--my great grandfather's brother, Braxton Bass! Braxton Bass was also a brother of my Uncle Sephus Bass, who both served in the 111th US Colored Infantry, and to see Uncle Braxton's name among the soldiers listed was unexpected, and quite pleasing.

I have known for over 20 years about Braxton's service with the 111th US Colored Infantry, and I have had for many years both his Civil War Service Record, and his Civil War Pension File. I know about his life in the 1870s till his early death in 1879, and I also know details of the life of his widow Fannie.

But his years right after the the war are not known, and it was truly a surprise to see something from 1867 mentioning his name. Although not much more than a name appears, it still tells me that he was called to get his bounty payment 2 years after the war had ended, and that tiny piece of information reflects a small sliver of detail about him and his life near Nashville.

One of the many benefits of the Freedmen's Bureau records, is the fact that unique records are contained in the amazing collection. A newspaper article is one of the most unexpected holdings to find among the many gems of the bureau, but thankfully, the Bureau staff in McMinnville Tennessee included the names of the soldiers from the Nashville publication. It was noted by the staff that some of the men were actually from that community, therefore, the article was clipped and placed among bureau holdings.


Close Up of News Clipping Found in Article 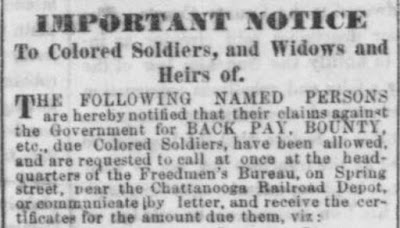 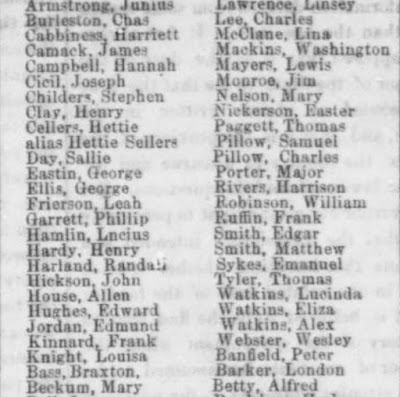 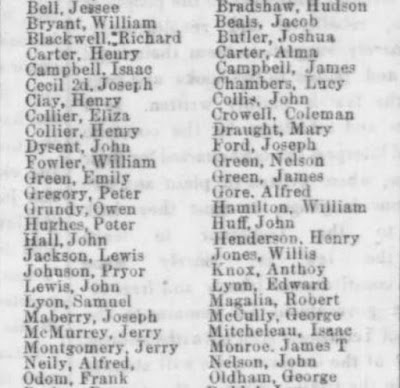 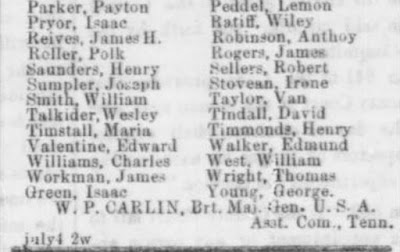 I checked several additional names from the list, on the Civil War database hosted by the National Park Service. Some of the men were from the same unit that my Bass ancestors were part of, (the 111th US Colored Infantry) and I noticed others were from the 13th US Colored Infantry. I have not checked the entire roster, but those with Tennessee based ancestors may find their own ancestors listed among those in the above clipping.

The post Civil War years were challenging for people of color, and often those who had served in the Union Army were met with hostility by a former confederate sympathizing community. However seeing the article two years after the war, does speak to a small degree of tolerance that may have been for these former freedom fighters to at least come forth and claim the bounty that they had earned with their service and with their courage.

Other Civil War historians are encouraged to utilize as many resources as possible to find data on former soldiers. In this case, a small clipping from a Freedmen's Bureau field office directed me to a newspaper, where a small piece of community history reflected US Colored troops in the Nashville Community.

As researchers we have learned to leave no stones unturned.
Posted by Angela Y. Walton-Raji at 9:57 AM No comments: 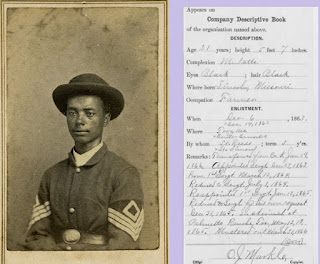 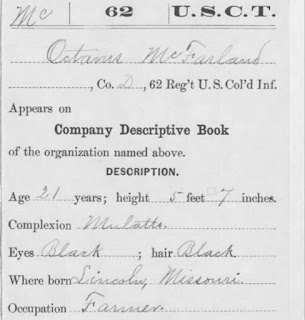 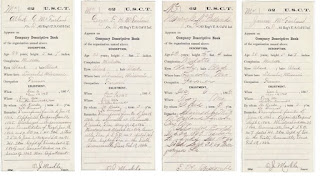 Posted by Angela Y. Walton-Raji at 4:06 PM No comments: