What Happened to Private Pryor and the 44th US Colored Infantry? 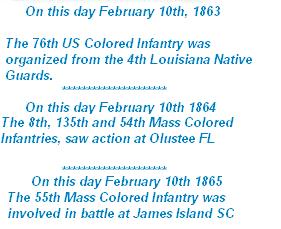 The image of Private Hubbard Pryor reflected the honor and dignity given to those slaves who escaped and who joined the US Colored Troops and in many cases received their first full set of clothes for the first time.
A visitor to the blog pointed out that there seems to be no knowledge of what his fate was at the end of the war. Upon reading that, I decided to take a look to see what may have happened to Private Pryor.

Private Pryor enrolled in the 44th US Colored Infantry and had enlisted in Chattanooga, Tennessee.

Military Service Record of Hubbar Pryor
It is noted that in October 1864, many of the soldiers in this regiment were assigned to Garrison Duty near Dalton GA. The soldiers of the 44th were overcome and an offer was made to surrender. The officers of the 44th requested that their men be treated equally to all prisoners. The Confederate soldiers had vowed to take no one prisoner if captured which would surely mean death for the black soldiers if captured. (It should also be noted that the massacre at Ft. Pillow had already taken place earlier that year.)  But they were overcome when an army of over 40,000 confederates overpowered them.  Many of the black soldiers were willing to fight to the death, knowing that either death awaited them or a return to slavery--a fate for many equal to death. But the officers ordered them to surrender nevertheless.

The official records of the War of the Rebellion reflect what took place when men of the 44th were captured: 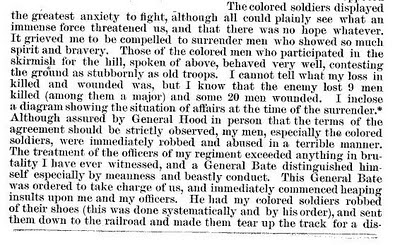 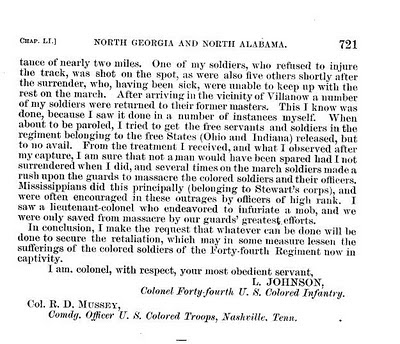 Reading the account of the treatment of these soldiers one realizes that Private Hubbard Pryor's fate was doomed. He may have been one of those returned to slavery, or he may have been one of the many who stripped of clothing and shoes and sent to work. He may have also been injured when white confederates tried to rush the black prisoners. The very sight of these men, instilled rage in those who thought of them as inferior.
A majority of the prisoner were stripped of their uniforms---the ultimate insult to these men.  It is clear that the act of removing the clothing was the removal of dignity from these men who dared to stand equal as men. Noting also that this was October---it was autumn and the removal of their clothing made them  immediately exposed them to the elements, completely vulnerable, and removed all semblance of dignity from them.  Some were immediately sent to work to take apart a piece of railroad track---with no shoes---perhaps to limit their capability of running away.
Whatever the fate of Hubbard Pryor---it would have been one that was painful.  His taste of freedom would have been brief at best.  Hopefully, he might have lived  however, the lack of a Civil War pension application suggests that had he lived, that he did not live long enough to apply.

Pvt. Hubbard's Service Record. No discharge ever furnished
He was mustered out "on paper" and there does not appear to be anything about him, from the time of capture onward. He is, most likely one of the many who paid the ultimate price for freedom.
If he died while a prisoner, his grave is most likely unmarked, and he was probably simply discarded for his body was no longer of value to anyone.
But he was a man, who should not be forgotten.  I place this image for him in his honor. 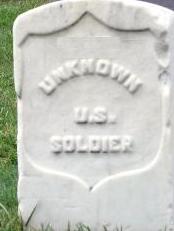 Thank you, Private Hubbard Pryor, for your bravery and your service and may you rest in peace.
You died not, in vain.
Posted by Angela Y. Walton-Raji at 4:02 PM