Recruitment Poster for US Colored Soldiers

This is a milestone year for many reasons. The institution of slavery was beginning to become dismantled. On January 1st of 1863, President Lincoln issued the Emancipation Proclamation. Of course the proclamation was more symbolic than directly effective, however, it was significant nevertheless. But a true stake was driven into the heart of the institution  of slavery, in the spring of 1863, when a Bureau was established to organize regiments of "colored troops" to join the War. The companies formed were to be consolidated into batallions and regiments by the Adjutant General. Non commissioned officers were to be chosen from the men in the various companies.

The year 1863 was significant primarily because men of color were finally allowed to become officially involved in their own quest for Freedom. But they did not enter the war as runaways, they entered it directly as men willing to directly confront their enslavers, and to fight for the right to live as free men. And so it was,  in May of 1863 a mere four months after the Emancipation Proclamation was issued, General Order 143 was released. This order possibly had a greater impact on the lives of the enslaved than any other order during the War. 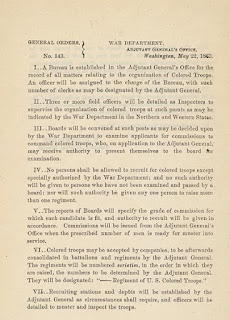 General Order 143: Creation of the Bureau of US Colored Troops

With so many commemorative events occurring between 2011 and 2015, it should be understood that one of the most critical years of the Civil War was 1863.

Finally black soldiers were allowed to enter the ensuing battle in their midst.  Although the goal was to preserve the Union for many and for others the battle was to secede and continue life as they knew it - including maintaining enslaving an entire people--for those who were allowed to enlist as Colored Troops, the issue was a simple one.  Theirs was a fight for freedom!

The effort to organize the various units was an enormous one, and by the end of the war there were more than 170 units, and these men comprised more than one tenth of the entire Union Army.

It should be pointed out that most of the enlisted men were "volunteers" enlisting to serve primarily in the War effort. These were designated as "US Colored" soldiers. However, in addition, there were some who were part of the regular army, such as the 5th Massachusetts Volunteer Cavalry, 54th and 55th Massachusetts Colored Infantries, and the 29th Connecticut Infantry.

It is also important to note that there were some units of men of color who had already organized, such as a group in North Carolina, the First North Carolina Colored Volunteers. Also a year earlier, in 1862, in Kansas  two regiments had organized and had seen action against the enemy. The First and Second Kansas Colored had already made a name for themselves a year before the US Colored Troops were organized.. Later these units re-designated brought under the jurisdiction of the Bureau of the United States Colored Troops as well. These men were all a part of a mighty effort of men of color who were true Freedom Fighters.

The enlistment of Black soldiers had a major impact on the families of the enslaved. Men were given freedom upon enlistment, and in many communities, the wives and children of those men who enlisted, often seized the opportunity and also freed themselves, forming communities near some of the Union encampments.These civilians were designated as "contrabands" of war, and many experienced freedom the first time due to the formation of regiments in their vicinity.

The participation of these Black men in the war was notable. They participated in major battles and campaigns from the Atlantic to the western theatre of the war. There were 17 Medal of Honor winners emerged from the US Colored Troops. However, the stories of all of the men who were truly men of courage must be told. The individual stories of the men are surfacing all the time, and finally these heroic freedom fighters are being honored.

Hopefully as the anniversary of the organization of the various units unfold during 2013, the communities where they were formed will  honor these men! Because of what they did , true freedom came faster. Some paid the ultimate price for that freedom, and their courage should be honored during this sesquicentennial year.