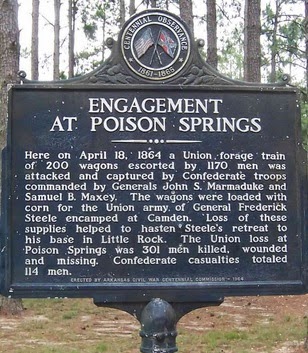 
150 years ago today the 1st Kansas Colored which was re-designated as the 79th US Colored Infantry was engaged in battle at Poison Springs, in Ouachita County Arkansas. They are remembered again on this day.


On April 18, 1864 the battle of Poison Springs occurred. This took place in Ouachita and was part of the Camden Expedition.

The actual engagement was short and confederate forces were able to drive Union soldiers away, and chased them in pursuit. But after a pursuit of only about two miles the southern soldiers stopped the pursuit and returned to address the wounded left behind. That was when the second heinous tragedy of April 1864, took place. Many men of the 1st Kansas Colored now were lying wounded on the ground. At this time, fighting had ceased and that was when, as they lay wounded, they were brutally murdered by southern forces. 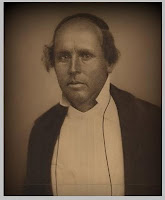 
Three  years ago I also wrote an article about this same battle here on this blog.

These men, were mostly men from Indian Territory who had fled into Kansas in the early part of the war. They were the first men of color to see action in 1862 at Island Mound Missouri. And they were now at the mercy of their captors, But their captors would not take on that role for they saw these now free men, simply as useless commodities to eliminate. Therefore in a matter of days after the same kind of massacre at Ft. Pillow---these courageous men, unable now to defend themselves were shot, bayoneted and tortured, then left on the ground where they died. Only a week before in Tennessee, the enemy had vowed to give men at Ft. Pillow no quarter, and the same occurred in Arkansas on that fatefu day.

Those freedom fighters were given no quarter, and in this case, they also were given no life. This tragic story of the massacre at Poison Springs is another of those stories not simply of war, but of man's inability to see humanity in others who are different. In this case, these soldiers of color were not seen as worthy of humane treatment by their enemies.

This second massacre would not be forgotten. Before the month would end, some of the compatriots of these massacred warriors would make Poison Springs their battle cry, at Jenkins Ferry. In fact many black soldiers from that day forward would remind each other of their mission as they fought for their freedom. Their battle cry would be heard and remembered for generations. "Remember Poison Springs!"

I remember the soldiers killed at Poison Springs on this day the 150th anniversary of that fateful day.


They did not die in vain.

Their sacrifice is not forgotten.

And they are remembered forever.

As I recommended in the previous article here are additional readings about the massacres such as Poison Springs, Ft. Pillow and others.
Urwin, Gregory J. W. “‘We Cannot Treat Negroes… as Prisoners of War’”: Racial Atrocities and Reprisals in Civil War Arkansas.” In Civil War Arkansas: Beyond Battles and Leaders, edited by Anne Bailey and Daniel Sutherland. Fayetteville: University of Arkansas Press, 1999]