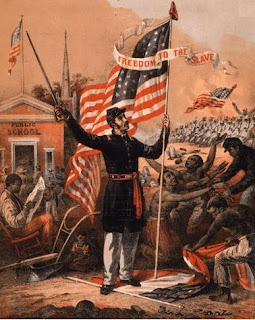 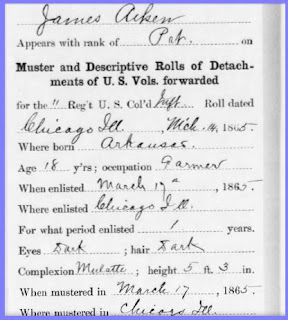 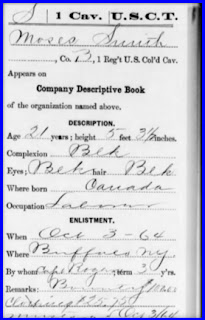 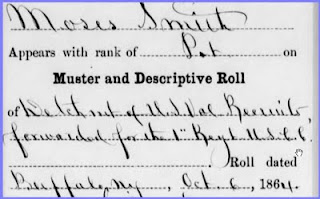 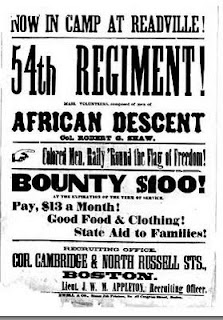 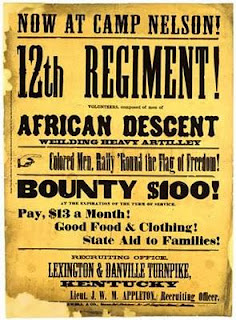 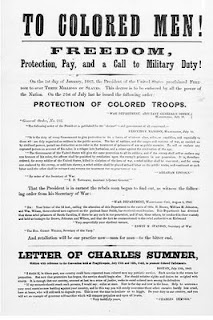 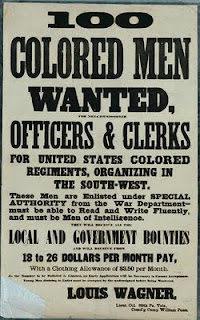 I have found nine different images directed at enlisting black soldiers and found them all enlightening, and eye opening.  The Civil War was truly complex, and the efforts to find men to fight was a mighty one as well.
Thankfully some of those stories can still be told by the artifacts that remain behind.
Posted by Angela Y. Walton-Raji at 3:31 PM No comments: 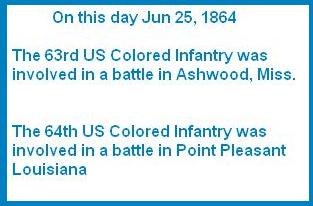 Assault of the 2nd Louisiana Colored Infantry on the Iron Words at Port Hudson
References to Louisiana's rich Civil War history, must include the Corps d'Afrique, the name originally given to these soldiers of African descent from that state. 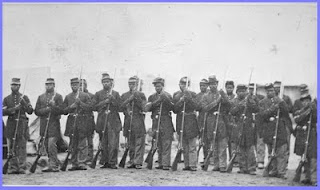 In some photos, such as this one, Black Louisiana Union soldiers were identified as Corps D'Afrique
At the New York Public Library, Image Gallery in the work, "Soldiers of the American Army, 1775-1941, a rare color drawing of Corps d'Afrique soldiers in uniform is found. 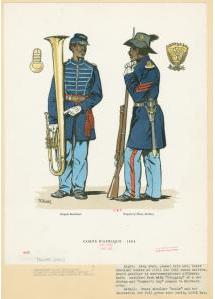 This image is a rare drawing of Corp D'Afrique Uniforms
Source: NYPL Digital Gallery
Louisiana has a rich Civil War history, and beyond the 39 black Union regiments from the state there were the thousands of men, women and children who resisted and who made it to the line as contrabands. Man worked at the encampments as scouts, spies, laundresses, nurses, field hands, blacksmiths and teamsters. Their untold stories now lie buried in the soil where these proud Louisiana people now rest.
This list of regiments is merely to mention them to catch the attention of sons and daughters of Louisiana and and hopefully Louisiana descendants will fully embrace them and truly tell their stories.
Posted by Angela Y. Walton-Raji at 5:10 PM 2 comments: 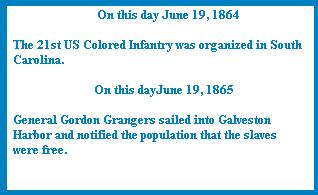 We discussed many things including military maps. Examples of all kinds of military maps were shown, but one map caught my eye immediately.  It was a map of Camp Nelson, in Kentucky. 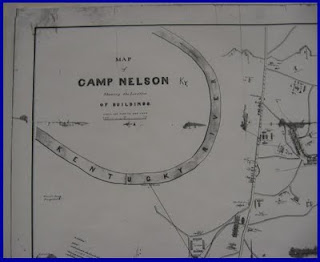 Map of Camp Nelson
The camp had been surveyed and platted by A.B. Miller, one of a small number of engineers approved by the government to survey military lands.

Map was platted and surveyed by A.B. Miller
The map is part of the National Archives Record Group 92 and the image is map number 74

But what caught my attention is that the map also reflected the presence on the military base of a community of refugee slaves.  This was, in fact, a contraband camp. 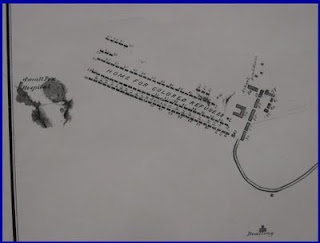 Map reflected "home for colored refugees"
I studied the map and became interested in the size.  The scale indicated that 1 inch was equal to 400 feet. By measuring the length of the refugee site, I was able to learn that the camp for former slaves was more than 1000 feet in length. It appeared that by the time the map was made, the camp no longer consisted of tents, but of separate dwelling for each family.
Of course having a strong interest in contraband camps I decided to learn more about the Camp itself. Could I possibly learn something about the lives of the refugee slaves?
Well I played with the name of Camp Nelson, and discovered a book, by Richard D. Sears.  His book is called  simply "Camp Nelson, Kentucky". 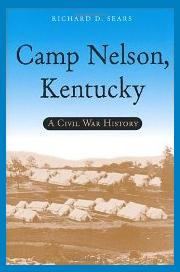 Book by Richard Sears
The book is a true gem for it also described how freedom was brought to many of the refugees and how they learned officially of their status:

(Image of text from Sear's book)
In March of 1865, several hundred refugees had occupied the camp and it was decided to move from the temporary tents to the use of wooden structures to serve as temporary homes for the refugees. Order was being established and the word was sent out by the superintendent of the camp that teachers were needed, as well.

Excert of letter from Sears book.  Letter appears on page 185 of book.
Some of the stories about the former slaves appear in the book, taken from official records.  On page 186 he tells the story of Martha Cooley, a slave of John Nave of Garrad County Kentucky. 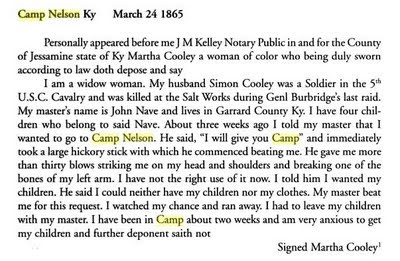 (Excerpts taken from book by Richard D. Sears)
There were so many stories of the trials and agonies of the slaves who described the beatings and horrors of Kentucky slave holders who tried to prevent their slaves from escaping. Many stories described horrific beatings given to female slaves whose husbands had enlisted in the Union Army. But nevertheless, some did make it though and although conditions were harsh also at the contraband camp, with disease, Camp Nelson was still their portal to another life.
As I continued to read more, I was even more delighted to discover online, an actual image of the Camp Nelson Contraband Camp. 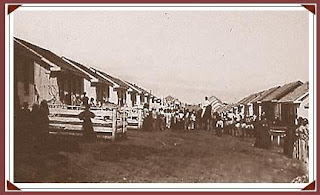 Camp Nelson Contraband Camp
One of the points made in the week long course on maps at Samford, is that many maps tell stories.  This proved to be true, and it took me to an experience where I learned more about the lives of those slaves who escaped.
I have such joy to learn of those who made it to freedom. And my heart aches for those who stayed behind and could not leave. Their fate was a painful one at the hands of angry masters in so many cases.
I never would have thought that a week long seminar on maps would provide another opportunity to learn more about some dimension of the lives of the ancestors.
And on this day when we celebrate freedom, I  salute the Ancestors and thank them for their strength and endurance.
It is upon their shoulders that I stand. And so, I shall continue to trace the footsteps of the Ancestors.
Posted by Angela Y. Walton-Raji at 8:10 PM 2 comments: 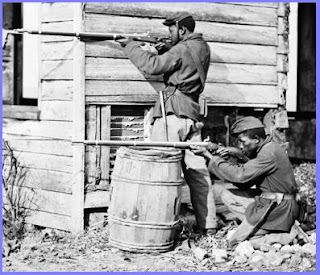 As one who researches both US Colored Troops as well as the Black soldiers who served with the Indian Home Guards., I have often wondered about the fate of black soldiers when they came into combat with the Indian Confederate units.
The Indian Confederates were from the Five slaveholding tribes---Cherokee, Choctaw, Chickasaw, Creek and Seminole nations. These tribes signed an alliance with the South at the beginning of the Civil War, in 1861.  One of the leaders of the Cherokee Confederate units was Stand Waite, the well known Cherokee leader and slave holder himself. 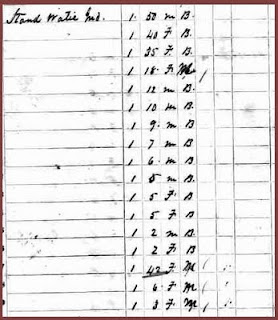 1860 Slave Schedule Reflecting Slaves of Stand Watie
I am fully aware of the rich history of the former slaves from the T.erritory who went into Kansas and joined the Union Army. Some joined the 1st and 2nd Kansas Colored, which later became the 79th and 83rd US Colored Infantry.  I have identified a few more than also joined the Indian Home Guards.
I have often wondered if any of these regiments ever came into contact with the Indian Confederates and if so, how did they engage?  Especially when the regiments were commanded by slave holders such as Stand Watie---how were enemy soldiers treated?  Did they experience the same rage as was experienced by the soldiers at Ft. Pillow?  Did they come close enough to have had that kind of contact?
I found an answer when I was not looking for it.  While examining records of the 11th US Colored Infantry, a regiment organized in Ft. Smith Arkansas, I saw the service record of a soldiers that had died in a battle involving Stand Watie's regiment. The record was that of Stephen Arbuckle.

Part of the military service file of Stephen Arbuckle, of the 11th US Colored Infantry
I continued reading and noticed that Pvt. Arbuckle was at the Battle of Gunter's Prarie in the Cherokee Nation.  At some point in the battle he tried to retreat from danger when he was captured and killed.  The manner of his death however, was a bit painful to read, and it answered a question that I had had---how were black soldiers treated by Indian Confederates when captured.

Document describing death of Pvt. Arbuckle
The soldier was not shot, but died by knife wound and mutilation. Was this standard? I can understand that in those circumstances where arms are down and soldiers did on many occasion engage in hand to hand combat.  Thus knives and any other weapons are used in those moments of intense crisis.  But beyond the fighting that brought death to an enemy soldier---was disembowelment a part of the standard combat?
Or was this the kind of death such as that of Pvt. Arbuckle, the result of rage?
Ft. Pillow taught us the degree of rage in which those who thought themselves superior as human beings, to black soldiers, went further than required to meet enemy soldiers. The very presence of former slaves as armed men brought forth a rage so strong that heinous acts occurred on the battlefield.
Did the Cherokee soldiers under Gen. Watie also have the same kind of rage that was repeated at Ft. Pillow, Poison Springs, Saltville and other battlefields?
There is no easy answer, except that Pvt. Arbuckle paid the ultimate price for his freedom, and that of others.
His record, like that of so many demand our attention, and reflect our need to look at the lives of the most ordinary of men, to learn to the greater lessons of human kind. For me, the lesson is that there are times, in which one must fight for causes that matter.
No cause is greater than that of Freedom. Rest in peace Private Arbuckle.
Posted by Angela Y. Walton-Raji at 12:35 PM No comments: