Reflections of a Sesquicentennial Year 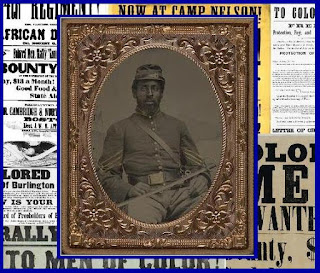 On January 1st, 2012 it will be exactly one year since I will have launched this blog. My interest in Civil War and it's history began with my own discovery of brave men and women who were freedom seekers in my own family. 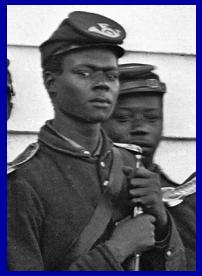 Some escaped as freedom seekers, to the contraband camps...... 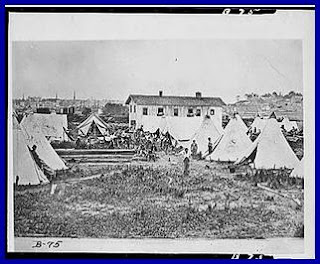 And yet others were held captive where they were enslaved, until their circumstances were changed by the war's outcome. 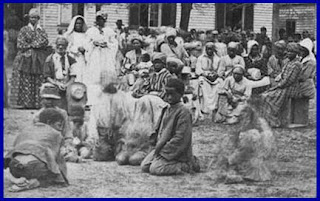 However, my discovery of these acts of resistance among my own ancestors and their stories needed to be told and they inspired me to create this blog.

A year ago, I was not certain if I had a year's worth of information to share. But somehow the stories came, new ideas formed and more stories emerged. I did fill up the blog each month with something to share. And I was not sure if I had many or any friends or associates who would follow my posts about the Civil War.  But now--as the year ends, and I have had over 8700 visits to the page, I have been so humbled. I have had followers from authors to fellow genealogists, to re-enactors who visit the blog.

But most importantly truly I have learned so much!

I have learned the value of telling both the story of ancestors who were freedom seekers, as well as speaking about those who remained. I have learned because I have seen empowerment in the eyes of those who listened.

At events where I spoke about Uncle Sephus and his escape from Nathan Bedford Forrest, I saw the eyes lighten up from  young cousins amazed at such courage of an ancestor so distant in time, but yet so close in our line.

At conferences when I shared methods of researching the history of US Colored Troops, I saw approving nods from my colleagues when they realized that they too, could explore this same chapter in their family history and embark upon their own Civil War research journey.

Now a year later, I look back at this blog which was created to honor the Sesquicentennial of the beginning of the Civil War.  I know however, that as each year of the Civil War went by in the past, each year in the present will mark a new landmark year with more to commemorate.

And there is so much more to tell. I am honored therefore to tell some of their stories, and I am grateful to the Ancestors that there is such a story to tell.

So as 2012 begins, new stories emerge as well.  I am humbled and I am honored to research them, to find what I can, and to pass them on.

Will We Come When They Tell Our Story?

There has been much discussion in recent days about the lack of interest in Civil War from the African American community.
To me, the lack of interest is merely a symptom of a larger problem. Much of it stems from a lack of knowledge, and from minimal efforts to teach, grow and learn from a rich history. But when that rich history is ignored and not taught by the very community itself, the end result can only be a misunderstanding of one's own past and this leads to blatantly low self esteem.
The Civil War---for many people of color is a story about places. There were the major battles in places like Gettysburg, Shiloh, Antietam, Bull Run. There were other incidents in places such as Pea Ridge,  Jenkins Ferry, Chapin's Farm, Petersburg. Yet these are place names that mean very little to the average person of color. There are fleeting images that might come to mind (if at all)  when these battles are celebrated or commemorated with flags, ammunition and fanfare.
In today's life, few African American children experience vacation trips to visit battlegrounds such as Petersburg, and should they go there on a school field trip, do they see their own faces reflected?
When the local community honors a civil war incident, there are ladies in hooped skirts, men in uniform--blue and gray, lots of flags---usually more Confederate flags---and that---to most people of color is a sign---stay away and protect the children! There is usually some period music being played at these events by a small drum and fife corps, and frankly few black parents take their children to such events. But why?
The discussion about the Civil War frequently has two arenas---one in the classroom and the other in the general public.  The recent comments in the press---those questions are being asked by scholars---who don't speak to the public--in many cases they speak to their colleagues--other historians.
The other arena is the public arena. And it is from the public arena where one finds many Civil war enthusiasts---re-enactors, living historians, local preservationists. But---most of those faces are not faces of color. At many public events where local celebration occur--there is a lot of fanfare. Guns, cannons, and flags. Especially the one flag that represents terror to many people. It brings back 20th century horror, and terror, and its very origins from the Civil War are enough to just say stay away and let folks have their 19th century party.
But then in 1989, came the movie Glory, a film which told a story of some brave men from Massachusetts, who became soldiers. But a child from Arkansas, or Mississippi, or Louisiana, or Alabama, the film has no connection to those men.
In Arkansas as Civil War celebrations emerge, from Pea Ridge to Jenkins Ferry, yet when the story of Jenkins Ferry is told, quite often but it is often told without mention of the Kansas Colored Infantry---later known as the 83 US Colored Infantry that fought at that battle. 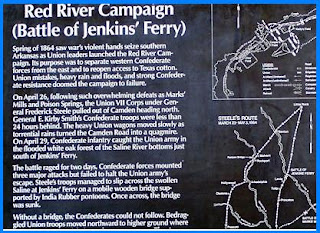 Historical Marker from Jenkins Ferry State Park
Do the children of Louisiana learn about the 39 regiments of US Colored Troops that were organized there? All children should know this--no other state in the union produced so many regiments!! 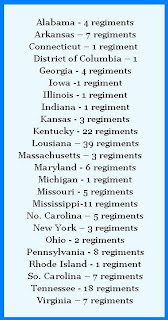 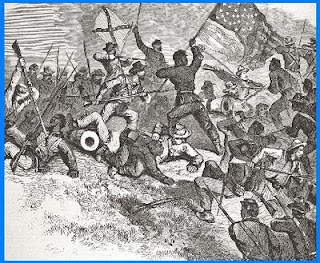 Historical Illustration of Black Soldiers at  the Battle of Port Hudson, Louisiana
How many children in Mississippi know about the amazing contributions of black Union soldiers in the Vicksbug Campaign? Several thousand black men were involved---but are the children both white and black, that live along the Delta taught this? 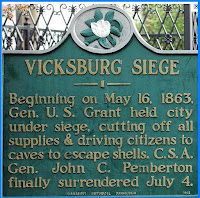 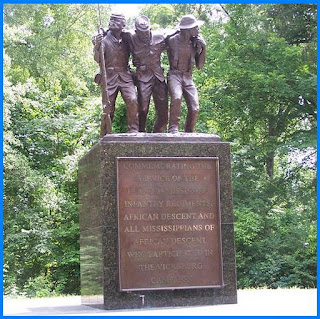 A Rare Battle Monument Honoring Black Soldiers at Vicksburg
The stories go on and on. But for the average person, and the effects of the war are still told from side only.
There are countless stories told about Union armies raiding small southern towns. One reads about the effects upon the town--good folks who lost property. Yet---some of the property lost consisted of human property. And their ownership of human beings as property has yet to be addressed---and this is what keeps so many who descend from that human property so silent. There has been no mention of the wrongness of it all. But these things did happen and yes, slaves were part of the property of the good folks. Their enslavement was morally wrong and their freedom was never celebrated. It was hushed, not mentioned and buried.
And even less known are the stories of the contrabands the ones who seized their freedom. And truly, the heart of the story of liberation was the story of the thousands who made it to the Union lines---on foot, by wagon, horses, mules and in some cases later taken by train to settlement camps----because they had the courage to free themselves.
But the story told that prevails is a romantic story of Tara and Gone With the Wind. For most people of color, Gone With the Wind is a horrible story--and nothing more than a slave owner's love story. Even decades after World War II ended, Hollywood would never make a movie of a Nazi love story--yet America and so many Americans dream of life in the good ole days and often see themselves as Scarlett, and long for Rhett Butler and love that movie! The people who were victims of Scarlet and her social class are depicted as caricatures, merely presented for laughter. The pains suffered of the people enslaved by Scarlett, are not visible, not shown and their personalities are shallow at best.
Until the larger story of human beings who resisted, are told, until the stories of those who eventually succeeded are told,  and until they are presented as people with a history worth telling, the lack of interest in this Civil War story will continue. 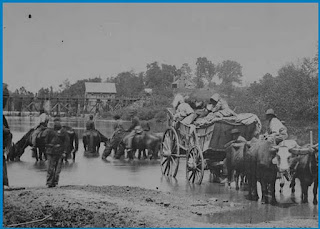 Library of Congress Image of Contrabands Arriving at Union Lines
How can this be taught well?  Has a curriculum been established to teach this portion of Civil War history?
Not as yet. Therefore, as the sesquicentennial celebrations continue---and they will continue till 2015---the silence of many will continue.  This silence is rooted in the burying of the story of what happened to so many.
My question is, will we come when they tell our story?
At least some are beginning to ask the right questions, and I have hope that things might change.
Posted by Angela Y. Walton-Raji at 9:15 AM 1 comment: