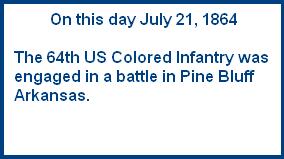 * * * * *     * * * * *     * * * * *      * * * * *
Recently I had  a conversation with a colleague about Civil War and the medals awarded during the war.  I was surprised  that so few people had heard about the Butler Medal, and it's history.  This was a medal awarded to black soldiers who fought in the Battle of New Market Heights.  Many men in that battle also received the Medal of Honor.
But the Medal of the James has its own history as well. Several years ago, I was delighted to have the opportunity to see one of the few (less than five) known Butler Medals.  A good friend, mentor and colleague, Dr. Agnes K. Callum allowed me to see this medal that she has, which was given to one of the soldiers who distinguished themselves in battle. The grandson of the soldier wanted his grandfather's legacy to
be remembered.
The medal has an interesting history. After distinguishing themselves in the Battle of New Market Heights, General Benjamin Butler commissioned a medal to be made to give to the black men who fought so hard in that battle. This silver medal was struck at Tiffany's, and the medal is inscribed with the words "Distinguished Courage Campaign Before Richmond 1864" Approximately 200 medals were made, only the names of 16 recipients of the Butler Medal are known to this day. Some had their names inscribed along the edge of the medal.
Several weeks after the men received their medals, General Butler was relieved of his command and the black soldiers were forbidden to wear the medal. The government refused to honor the medal as "official". After more than a century after the war ended, two attempts were made to have the medal recognized officially, but they were still denied.
I decided to share the fact that this medal exists and that there is an interesting history attached to it. 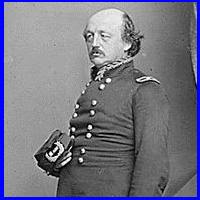 General Benjamin F. Butler had the Medal of the James created
"I had the fullest reports made to me of the acts of individual bravery of colored men on that occasion, and I had done for the negro soldiers, by my own order, what the government has never done for its white soldiers – I had a medal struck of like size, weight, quality, fabrication, and intrinsic value with those which Queen Victoria gave with her own hand to her distinguished private soldiers of the Crimea…These I gave with my own hand, save where the recipient was in a distant hospital wounded, and by the commander of the colored corps after it was removed from my command, and I record with pride that in that single action there were so many deserving that it called for a presentation of nearly two hundred.”.–"  -  Benjamin Franklin Butler
In 2001, Historian Agnes Callum of Baltimore Maryland,  was photographed with the Civil War Medal The medal belonged to Gilbert Harris a former slave from Edgecombe County North Carolina. He escaped and joined the 2nd US Colored Cavalry. His medal is the only medal known with the name of the soldier engraved on the side.  In 2001 Mrs. Callum was photographed by the Baltimore Sun and discussed the history of the men who fought and also the history of the soldier to whom the medal was awarded. 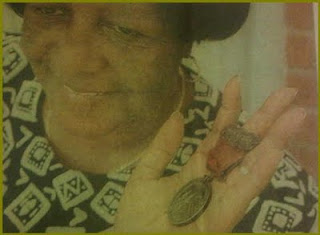 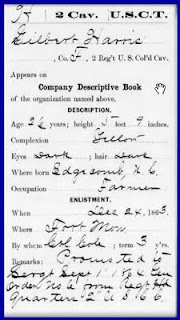 Page from  Service Record of Sgt. Gilbert Harris. Sept 1864
Three weeks after this was collected he was in the battle of New Market Heights
Source:  NARA Publication M1817  Service Record
Footnote Image: http://www.footnote.com/image/#33|261449152
I recently learned that replicas of the Butler Medal have been made. I hope that the history of this medal will be explored by more civil war enthusiasts.

Replica of the Butler Medal
Although never recognized as official, the medal has its place in history, and hopefully others will become aware of story behind the medal, as more strive to tell the history of the US Colored Troops.
Posted by Angela Y. Walton-Raji at 6:13 PM 1 comment: 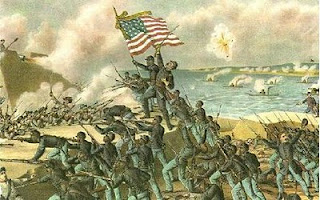 Posted by Angela Y. Walton-Raji at 6:48 PM No comments: 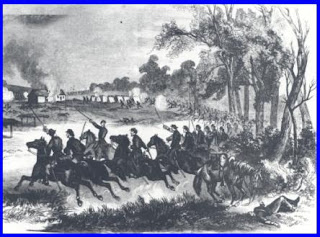 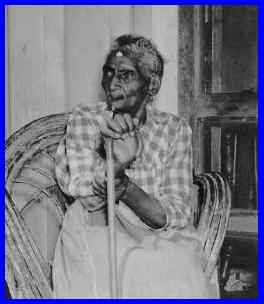