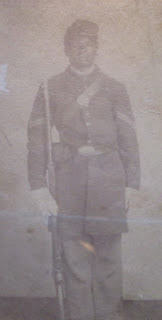 
A research trip to the National Archives has uncovered the image of a long forgotten freedom fighter. Aaron Brooks was a soldier in the 54 Arkansas Regiment of United States Colored Troops.

The photo had been mentioned to me, when I spoke in Arkansas in April of this year. A woman who is conducting graduate studies mentioned that she had seen an image in the file. I finally got the opportunity to conduct some research and to request the Civil War pension file of the soldier. The file itself was thin, with not many details about the soldier, nor much about his widow who received a pension after his death.

The image was a small one, that had been affixed to a small piece of paper, and if not looking closely could have been overlooked. And the image, even while affixed to the piece of colored paper, was still small enough to hold between two fingers of my hand. 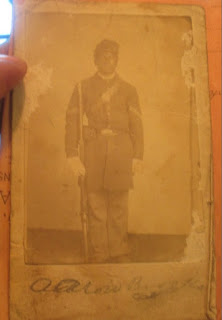 The photo had been placed, thankfully in some protective transparent paper, to protect it. 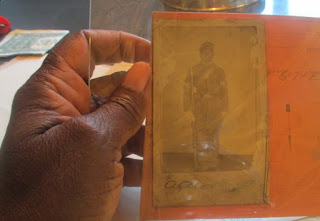 Looking at the photo in the small file brought thoughts to mind. Most likely this photo was submitted by the widow, to whom it was clearly never returned. At the same time, the importance of this photo is enormous--this is the first image to my knowledge that has ever been noted of an Arkansas USCT whose name is identified. And, this is possibly, the first Civil War image of an Arkansas Black soldier taken during the time in which he served.

I examined the image closely to note as many details as possible. It was important to zoom in on his face. This face of this young man is the first face that can be named, of an Arkansas Black Union Soldier. Of the many USCTS buried in Ft. Smith National Cemetery, and the USCTs buried Little Rock National Cemetery, this image of Aaron Brooks finally adds a face to the Arkansas Black freedom fighters. 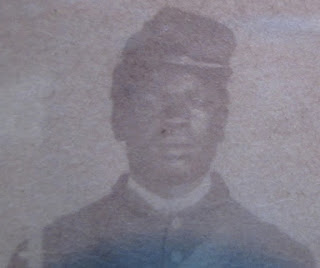 Born in Phillips County Arkansas, he enlisted in the Union Army in Helena, in June 1863. Within a few short months, he was promoted to corporal. The promotion was recorded in April 1864. After that promotion was when the photo above was made as his corporal stripes are reflected on the sleeves of his uniform. 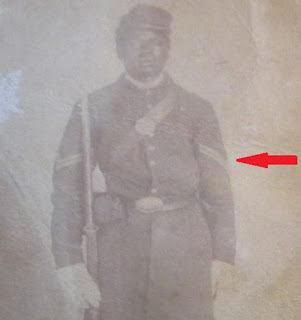 
Aaron Brooks was possibly as literate man, as a signature bearing the name of the soldier was found at the bottom of the image. If he was a literate man, that may be one of the reasons he was promoted after several months of service.

It should be noted that this standing photo of Aaron Brooks is one of the first, if not the only image known to identify a Black soldier from Arkansas taken during the Civil War. Seeing this image of Corporal Brooks standing with his musket on the side, and white gloved hands to his side reveal a sense of dignity that this man, once enslaved, could at last display.

The service record of the soldier indicates that he was a young man of 22 years.

After the war he remained in Arkansas and lived as a farmer. He married in the late 1870s and together they farmed in the community of "Young township" in Pulaski County. Young Township no longer exists in Pulaski County. He was enumerated with his wife Dicey in the 1880 census. 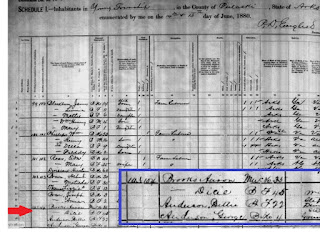 
In 1890 Aaron Brooks filed for an Invalid pension, but shortly afterwards, died, before collecting a payment. His widow Dicey also applied for a pension but it appears that although she did not pass away until 1914, she only received one payment. 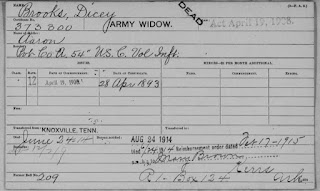 In spite of the lack of detail about Aaron Brooks, the photo says it all. A man once enslaved was given an opportunity to fight for his freedom. He seized this opportunity and served honorably. He was a loyal soldier, whose name we now know, and whose name we should not forget. Like thousands of others from his native Arkansas soil, he represents them. He sought no accolades, or honors after his service. He lived a quiet life, worked the soil as a farmer, and died. But he shall not be forgotten, for we now have the image of this man, erect, proud and standing with dignity.

How fitting that in the 150th years since the Civil War ended and freedom was obtained for 4 million others once enslaved, we now have the image of this son of Arkansas, to be counted among the 200,000 men of color who served their nation. He was a simple man, but now we can look at his young face and say, thank you, Corporal Brooks. Your people appreciate what you did.