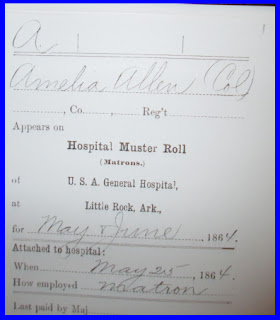 Last July I wrote an article about a ledger that I had located reflecting the service of "Colored Contract Nurses" who served in the American Civil War. In that ledger most of the nurses served in hospitals from Maryland to North Carolina. However I became quite interested in the additional places were women of color worked for the Union Army as Nurses, Matrons, and as laborers including laundresses and cooks.

I later stumbled  upon another set of records by accident. I was looking for a soldier who served in an Arkansas regiment, from the 57th US Colored Infantry. As this is one of my favorite regiments, I was interested in learning how many men in the entire regiment had filed for pensions and received them. I was leisurely scrolling through the regimental pension index when an unusual pension card caught my eye.

As expected there was the name of the soldier, his application number and his certificate number indicating that he had received a pension. It also was noted that his widow later applied for and received a widow's pension. This is common and appears on many cards where the pensioner was survived by a widow. But it was the note at the bottom of the card that struck me as a real find! 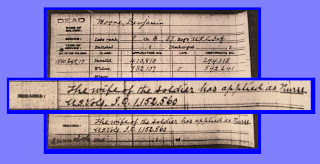 
Upon seeing that information I had two tasks to complete that day. First I had to learn the name of his widow, as she was not named on the Pension Index Card. Secondly I had to ask whether names of other women who served as nurses could be found. I was successful on both counts!

The Pension file was thick--extremely thick and in the midst of the many pages (well over 150 pages) was a separate set of documents pertaining to Clara Moore. I had found her name, and tucked into his file was her own Pension File.  This is one reason the file was thick. The other reason was that there was a contesting widow who also claimed to be the widow of the same man! (But that is another story to tell at another time.) I was enthralled by having documented a woman of color who served as a nurse in the Civil War 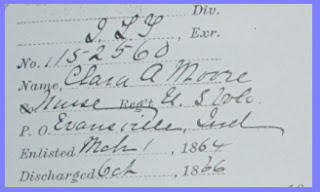 Clara's case was actually no without its complications. The surgeon under whom she worked as a nurse was deceased by the time she filed for her own pension, and there was difficulty in locating evidence of her having served, with the 57th as a nurse. Proving her case turned out to be difficult,  even though there was evidence in the file that she did serve and others made statements under oath of her service. Even very specific data was obtain pertaining to her enlistment and discharge dates were found. And I was please to find a detailed statement from Clara herself who also told part of her story. 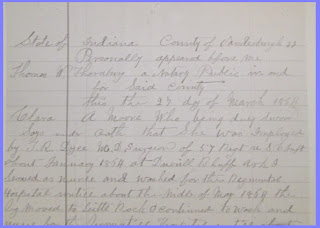 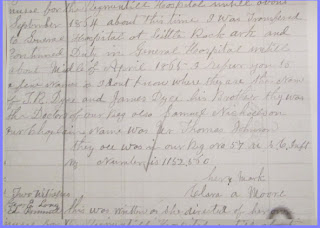 I learned as I read through the file, that Clara and her husband later moved to Indiana after the Civil War, and then their marriage ended a few years later. However, both Clara and Benjamin remained in Indiana for the rest of their lives and for whatever reason, never returned to Arkansas.

Could others be found?
My second interest was learning whether more women of color who served in the war could be found and identified.  My task was to spend some time with the military specialist at the Archives, and see if more names could be located.

What a surprise to find that there is a series of service cards, pertaining to Civil War staff, including hospital employees. There are seven boxes in fact of service cards reflecting the service of civilian staff that served in Union hospitals.  I wasted little time, and requested to see these records.

The documents were identified as part of Record Group 94, Records of the Adjutant General's Office. The entry number is 535, and I decided on a recent trip to begin the process of documenting these women. I pulled the first box and began to sort through the many cards. 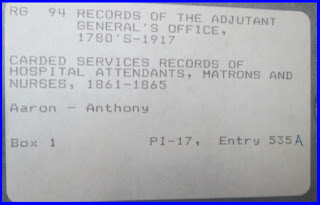 Since there were so many cards, I decided to  begin a methodical approach to this effort and I began a process that will unfold over the next several months--to document all women of color who served as medical attendants in some capacity during the Civil War. Some had humble jobs as laundresses and cooks, but others worked alongside the doctors and surgeons as nurses and matrons.

So, beginning with the Box 1, and surnames beginning with the letter "A", my job has begun. In most cases women of color were flagged in some way with the letters "Col" or occasionally the word "Colored" spelled out. But their service records were there, and I was fascinated to also see the names of the hospitals where they served, as well. Some were familiar to me, but so many more were not. 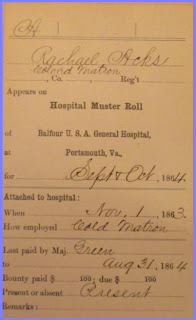 Only looking at the cards, one can see that nurses of color were utilized throughout the nation were wounded needed care.In the cards below, the service of two different women are reflected. They are both called Anna, but one can see that one served in Mississippi and the other in Tennessee. Service cards of two nurses. On served at the Freedman's Hospital in Memphis
and the other served at a hospital for Freedmen in Davis Bend, Mississippi.

So my project begins.

Over the next several months I shall access this collection of service records of Civil War nurses, and record the image of all women of color who served as nurses, matrons, laundresses and cooks.

Like other pertinent stories of the Civil War, these women, most of whom has just tasted the flavor of freedom, gave their all nursing those suffering from wounds, and from disease.

May their stories also be told and may they never be forgotten!

Posted by Angela Y. Walton-Raji at 8:53 PM No comments: