At Last Their Names Are Called: Men of the 56th US Colored Infantry

In August of 1866, 175 Black Union Soldiers died on the way home to Missouri after the Civil War. They had fought for their freedom and had won. But they would never live to enjoy the freedom they earned for themselves and their loved ones. An epidemic of cholera erupted and 175 lives would be lost. They were returned to Missouri and buried, on Coke Island at first and later in 1939 their remains were transferred to St. Louis Jefferson Barracks National Cemetery for reburial, but this second time they were placed in a mass grave, with nothing to designate who they were.

Today, after 80 years, the names of 175 men of the 56th US Colored Infantry have had their names shared once again to the world.

In a special ceremony organized by Sarah Cato and other members of the St. Louis African American Genealogy & History Society, these men were remembered. All of these men died in August 1866, and today on a beautiful summer day in August, they were honored.

When they were moved to the National Cemetery in 1939, they were placed in a mass grave with a stone that simply said, "Unknown" . But their names were known, and were recorded in the official records as well as in a later publication. The St. Louis genealogy group learned of this occurrence several months ago, and became involved in correcting the omission of their names and the lack of honor due these men. (Karen Baker of the St. Louis group and Sarah Cato shared their names and they appear in the list below.)

Today, in a moving ceremony at Jefferson Barracks in St. Louis Missouri, their names were read, and honor was brought back to these freedom fighters of the 56th US Colored Infantry.

NAMES OF THE SOLDIERS:

Read aloud  by George Abingdon (A Descendant of 1 of the 175 soldiers.)

"An ancestor never dies till there is no one left to call their name."
Yoruba Proverb
Posted by Angela Y. Walton-Raji at 1:37 AM No comments:

Remembering 175 Men of the 56th US Colored Infantry

On August 16th, at Jefferson Barracks in St. Louis 175 Union soldier will have their names read. These men had served the Union, fought for freedom, and had earned their honors as soldiers of bravery and courage.  Towards the end of the war, disease had struck many of these men, some of whom were already weakened by injuries in the war. Cholera had broken out and as they were finally tasting the first days of true freedom at the end of the war, these men never tasted civilian life as free men, for these men died of cholera.

They were buried at the time of their death and their bodies were at rest, until 1939 when they were all placed in a mass grave. No markers bear their names, their remains were mixed and men who died in dignity as US soldiers were reburied with nothing to indicate who they were, nor anything about their regiment. Although their service was clearly known, this was the fate of 175 Black men, who served in the 56th United States Colored Infantry.

But now in 2013 in a few days, these men will be honored, their names will be read, and their service will be recognized.  The ultimate goal is to obtained memorial headstones for these men, whose names are known and whose history is not lost--it was simply overlooked and then forgotten.  But now at last, the city where they are buried will honor them.

A memorial service has been planned for August 16th. A color guards, reenactors, and a service will honor these men, and a presentation of the colors of the regiment will also be presented. A descendant of one of the men has been found, and there will be a major effort to restore dignity to men whose nation has looked the other way for decades.

The St. Louis African American Genealogical Society has taken steps to honor these men and they will among those chosen to call the names of the 175 men. 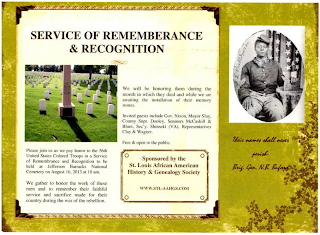 Coming up in August, 175 men will be remembered and given some long overdue respect. Towards the end of the Civil War, many black men were still in service and
Posted by Angela Y. Walton-Raji at 9:14 PM No comments: