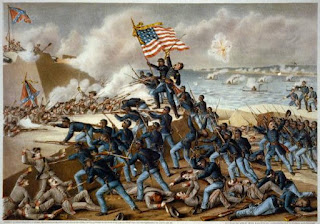 The image above depicts the actions of the 54th US Colored Infantry in the famous assault on Ft. Wagner. July 17th is the anniversary of that famous battle. Several years ago, the movie Glory presented the story of the 54th as the regiment participated in the campaign against Charleston. The story is well known, when Robert Gould Shaw led his men in an attack on Ft. Wagner. He was killed in the assault as were many soldiers from the 54th.

Interestingly this is often depicted as one of the major battles involving Black Union soldiers, but a story often overlooked is a battle that occurred several hundred miles to the west in Indian Territory.

A battle occurred at Honey Springs, on the same day, also involving black soldiers and this story had a different ending, and thanks to the actions of black soldiers of the Kansas Colored, Ft. Gibson did not fall into Confederate hands, and was a major victory for Union soldiers. 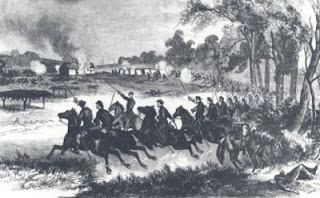 General Blunt commanded a unit of the Army of the Frontier, which included the Second Regiment of Indian Home Guards, and the First Kansas Colored Infantry. This unit should be noted as the first Black regiment in the Civil War to engage in combat, when they fought at the battle of Island Mound Missouri in 1862. At Honey Springs these men distinguished themselves and some cite the actions of the 1st Kansas Colored as being the very reason why Ft. Gibson was saved and the Confederates were weakened on the western frontier. The whole regiment was engaged in the battle at Honey Springs, and the flag of the 29th Texas Cavalry was captured in that battle.

This is also one of the few battles in which an eye-witness described her recollections in one of the WPA Slave Narratives. Lucinda Davis was a young girl who was a slave of a Creek Indian, Tuskaya-hiniha. Raised in the Creek Nation, she lived along the Texas road and shared her story of the Battle as she saw Confederate Indians riding towards Honey Springs. She witnessed their retreat after the battle, and also saw the Union soldiers in pursuit, of the southern soldiers on the run. Both battles occurred in July at the same time, There are monuments that describe both battles and that honor the fallen soldiers. But as the nation commemorates the on-going sesquicentennial events, my hope is that the actions of the Kansas Colored at Honey Springs are mentioned as much as the 54th Massachusetts Colored Infantry.

Both regiments were distinguished, both consisted of noble and brave men. and both deserve their places in history.