In Memory: William A. Gladstone 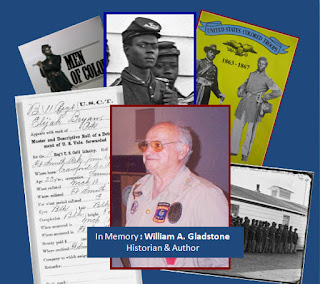 
It was just shared today that Civil War author and historian William A. Gladstone passed away on Wednesday November 7th 2012.

He was the author of two books about the United States Colored Troops and shared his passion regarding the history of the US Colored Troops with many. I have often used his book as a quick reference when I need to look up the origin of a USCT regiment. 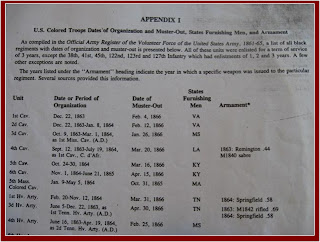 His work has also been useful when I need to know the date and site of a Civil War battle involving USCTs. 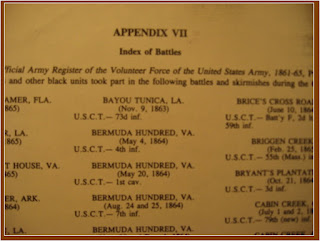 Gladstone's work is appreciated and he will be missed by many in the community of Civil War historians.

So little is known about the women of color who served as nurses and workers in the American Civil War. Even less is known about those who served as matrons.  These were women who actually supervised the nurses who tended the wounds of the soldiers. Many of the matrons had also served as nurses as situations demanded, and in dire times their duties were not distinct from that of the nurses laundresses and cooks. Most names remain hidden from the pages of history, so when we find them, we need to stop, acknowledge them, and record their names, for they too, made a contribution. For me, today was such a day.

Admittedly, I have been locating the names of  nurses color, for several months, Often while searching for other things, is usually when I find them. However, seeing the names of these women is so rare, that I am compelled to stop, study them and share them.

Their numbers are not large, which makes it even more critical that their presence is acknowledged when telling the stories of the Civil War, because they too were there, and they too served the noble effort in the War for Freedom.

Today was one of those days when I found a name---only one name, but of a woman who deserves to be mentioned: Malinda Sanders, a volunteer with the 11th US Colored Infantry. 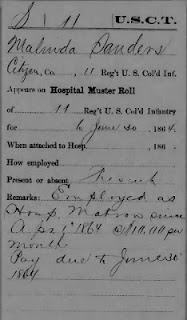 Details about her life remain unknown, and data such as her place of birth, enlistment site and life after the war are not stated. In addition, it is clear that even when the service records were being compiled in the years after the Civil War, it was noted that nothing else was retained about her.

The small note on the bottom of the document notes that this was the "only roll on which her name appears."

However, a few facts can be gleaned.

She was matron of the 11th US Colored Infantry. This unit was organized in Ft. Smith Arkansas, in December of 1863, and was attached to the 2nd Brigade in the District of the Frontier, as part of the 7th Army Corps. The unit remained in Ft. Smith until November of that year when they were then moved eastward towards Little Rock.

Malinda was hired in 1864 during the time that the regiment was based in Ft. Smith. A number of regiments were moving through the area during the months from spring to fall of 1864. She is clearly identified as a civilian and a citizen from the area.

In fairness, I had to also wonder if Malinda could have been a volunteer from the white community. But the realities of the south, of the social norms of the day and standards of the day would answer that question.

The chances of finding a white woman serving as a volunteer in a regiment of black men during the Civil War would have been unthinkable, and the local population would never have allowed such a social taboo to be broken. Even those with Union sympathies would have been to more than cautious to allow a white female to be around so many armed men of color during a time of new found freedom for men who were once enslaved. The social norms of the day would have not permitted it.

But, to be certain I was compelled to check the 1860 Federal census in case there was a woman living in the local community by the name of Malinda Sanders. The 1860 census of the local area in western Arkansas, and specifically Ft. Smith, and Van Buren, (the two communities with large populations) yielded no white females with that name. The same 1860 census also reflected free whites who lived in nearby Indian Territory, and no such name of Malinda Sanders was captured.

So the chances are strong that in 1864, Malinda Sanders was from the population of newly freed black people, once enslaved in the area. She would  have then been part of the local citizenry and would have been part of the population recruited. A good number of  black men were indeed recruited in the Ft. Smith area, until November of 1864 and during that time was also when Malinda was hired as a matron.

How long did she serve as matron?

Was she a young woman?
Was she an older woman?
All of these facts remain unknown, and it is possible that by the time that the regiment moved east towards Little Rock, she was no longer in service.

Perhaps her time as matron of this Black Civil war regiment was short, but because her name appeared among the names of the many enlisted men of color who were true freedom fighters on the western frontier, her name must not be skimmed over lightly and remain unseen.

Her service was needed, her care of those who were sick and wounded was essential, and she will remain one of the many unsung heroes from the Civil War.

However, on this day, as I passed her name I was compelled to draw brief attention to this brave woman, who served, and whose life will otherwise remain unknown. We owe her thanks as well.
Posted by Angela Y. Walton-Raji at 5:57 PM 2 comments: