USCTs Buried in Mass Grave to Be Honored at Jefferson Barracks 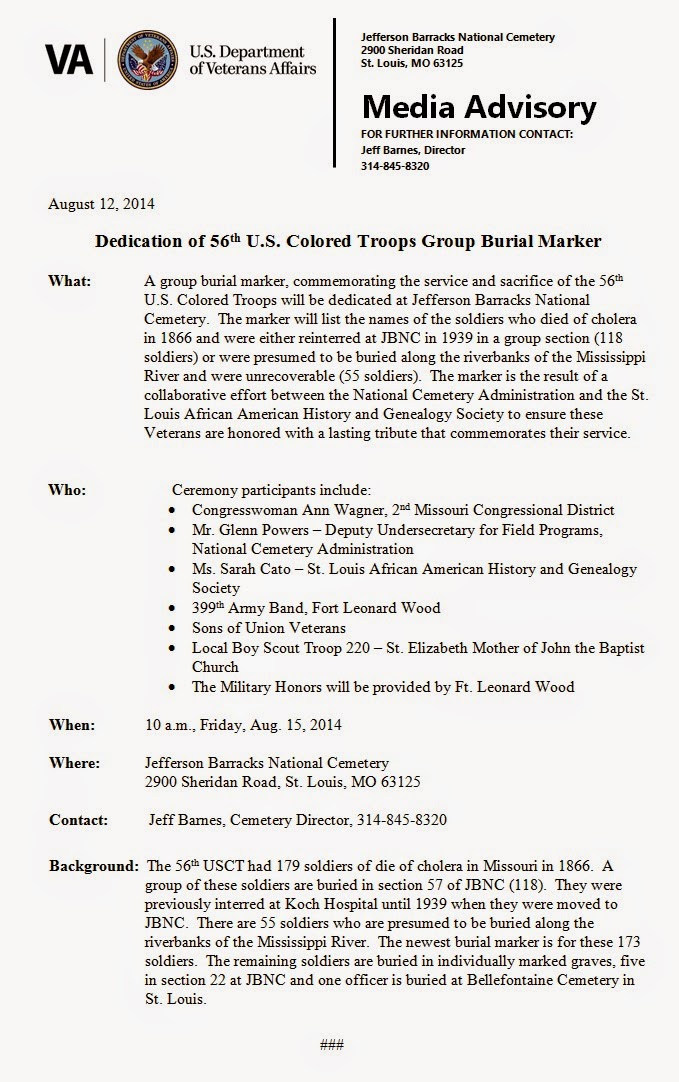 After decades spanning over a century, 173 men who escaped slavery, fought for their freedom, and won, only to succumb to disease will have their names restored.
In 1866 men of the 56th US Colored Infantry died of cholera on route to Missouri where they were to be discharged and to live their new lives in freedom. An epidemic of Cholera struck the steamers that took them back to Missouri and within a few short days in August 1866 many would succumb. Many were buried in Quarantine Island and in 1939 their bodies were removed to Jefferson Barracks cemetery. But instead of single burials, they were placed in a large mass grave with their names no longer identifying their remains.
Thanks to the efforts of the St. Louis African American History and Genealogy Society, the names are now going to be placed on the site of the mass grave, and at last the "Unknown" designation of these soldiers at the cemetery will no longer describe who they are.  A plaque will be unveiled this Friday at Jefferson Barracks bearing the names of each these freedom fighters, and ﻿a respectful ceremony is also being planned.
Ms. Sarah Cato, a member of the society shared a press release from the Office of Veteran's Affairs inviting the public to attend this ceremony that will restore the honor to these soldiers.

The society is to be congratulated for its hard work in honoring these soldiers, and the names of these men can now be seen and known by all.

May these men rest in peace, and may their honor, service and record be known forever.
Posted by Angela Y. Walton-Raji at 10:31 AM No comments: