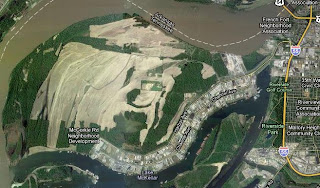 Aerial View of President's Island today via Google Satellite Image
When my gr. gr. grandmother Amanda Young Barr applied for a Civil War widow's pension, she told many parts of her life to prove that she was the widow of Berry Young her first husband, who left to join the Union Army.  Other witnesses spoke on her behalf, including a sister Mary Paralee, whom she had not seen for 50 years.  It was from this gr. gr. aunt's testimony that I learned how she and others lived in a contraband camp, called President's Island.

At the time of the Civil War, President's island was truly an island sitting in the Mississippi River, just outside of Memphis. With the shifting soil and the passage of over 150 years, it is now a peninsula outside of Memphis and only a few minutes away from downtown.

It is from that gr. gr. aunt's testimony that I learned about the enlistment of black men as soldiers from Tippah County Mississippi. Berry Young, my gr. gr. grandfather, his son John and how she and many other slaves fled for freedom from Ripley, Mississippi.

There would have been a degree of safety for the newly freed slaves on the contraband camp, and hopefully they did not suffer the terror that newly freed slaves in Memphis endured. There was a reign of terror heaped upon the freed slaves, by angry whites who hated to see freedom given to people that they  had been taught were lesser forms of humanity---and now with their new freedom, they were immediately hated by the classes that once considered themselves superior.

Some of these images were captured in 1860s publications. 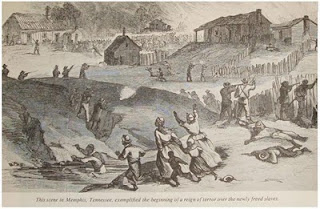 Source: Harper's Weekly May 26, 1866
It is therefore understandable that many freed slaves were not rushing to live on the mainland, preferring to live for many years on the island. Small schools were formed and a cemetery was once there on the island as well.

I took me a long time to find out information about President's Island.  But I learned that during the era of the Federal Writer's project in the 1930s, a survey and brief history of President's Island was written in the book "Tennessee. A Guide to the State". 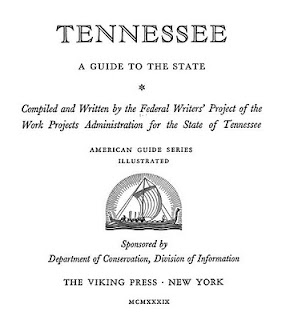 Cover of WPA Guide to Tennessee written in 1939. 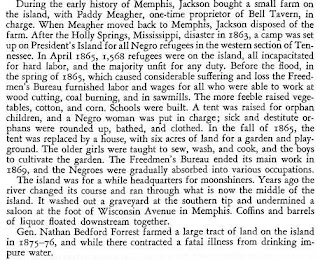 So apparently according to this article at least 1500 slaves actually lived on the island. In the spring of 1865 the Freedman's Bureau established labor contracts on the island. This suggests to me that there are some records that I might find at the National Archives. So, my next trip to the Archives will involve looking at the Memphis Freedman's Bureau records to see if I can find some people who were still living on the island at that time.  And unfortunately the cemetery that was once there was washed away as the Mississippi changed its course.

While searching for more information on President's Island, I learned that well into the 20th century, there were still inhabitants of President's Island.  A teacher at East High School in Memphis, Mr. Mark Scott has devoted a project form one of his classes in history---to preserve what remains of the old one room schoolhouse from President's Island.  This may be the once artifact that reflects the presence of a community that last almost a century. 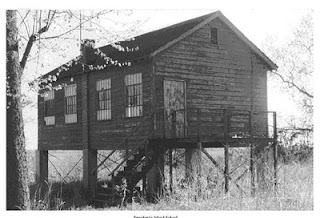 Old Schoolhouse on President's Island. School closed in the 1960s.
The teacher at East High School also created a blog about the school and the community that once resided there.  Students in his AP history class conducted an oral history of the are, and he created a small blog about the old school house.  The people interviewed were all born after 1930, so they won't be in any 1920 census, however, I did see the name of one of the teachers, Mrs. Elnora Devers. I found Mrs. Devers in the 1930 census living in Memphis, on Louisiana Street.

Her occupation was indicated as teacher, County School
1930 Federal Census, Memphis TN
I still have many questions about President's Island and its residents. One of my goals will be to go through records at the National Archives to see if early labor contracts can be found.
The residents who lived as contrabands in the early years of freedom are not forgotten. I am committed to learning more about them.
Posted by Angela Y. Walton-Raji at 8:00 PM