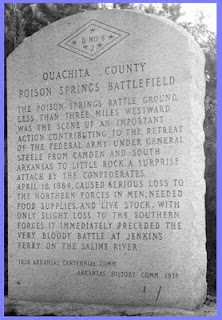 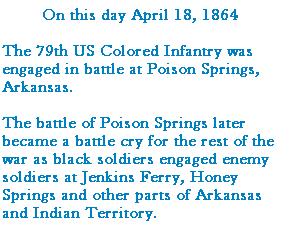 It should be noted that many of the soldiers of the 1st Kansas Colored were former slaves from Indian Territory, and the among the confederate soldiers that they confronted were former slave holding Indians from the Choctaw Nation.  (Choctaws along with the other tribes from the Trail of Tears, were also owners of African Slaves, and this was the first major battle in which former slaves from these tribes would meet former slave holding Confederate Indian regiments. They would later engage the Indian confederates at Honey Springs, Indian Territory in the same year.)

At Poison Springs Arkansas, General Frederick Steele had ordered a foraging expedition of about 600 men to gather corn from area farms and plantations, to address the Federal forces shrinking supplies. About 18 miles from Camden Arkansas the forces which included members of the 1st Kansas Colored (later known as the 79th US Colored Infantry) were to supply of many wagons with corn in order to secure much needed food. The Union soldiers were said to have been ambushed by Confederate forces that had outnumbered this smaller band of Federal soldiers. With approximately 3600 men, the Federal soldiers were attacked.

Official records indicated that at first, the Kansas Colored fought off two of the attacks..  The Confederate forces were then joined by the Choctaw Brigade, a Confederate unit led by tribal leader Tandy Walker, forcing the Union soldiers into retreat. As the Union soldiers retreated the fighting was halted. 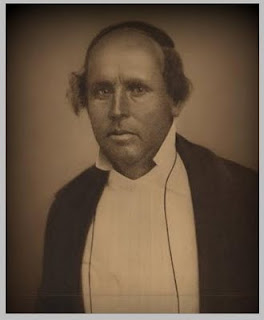 Tandy Walker, Choctaw leader, & Confederate General.  He led the brigade at Poison  Springs
As the soldiers retreated, attention was then given to the injured black soldiers of the Kansas Colored.  The sight of black men in uniform often brought out immediate rage from Confederate soldiers.  And as had taken place at Ft. Pillow,  and later Saltville and other places, the injured black soldiers were seldom taken prisoner--they were slaughtered.

It has been explained by some historians that the very sight of black men, who throughout the lifetime of many southern soldiers had been held in a lesser societal status, to now see them now fighting equally as men, immediate rage, rose from their inner core, and no military training would allow them to treat these former slaves as prisoners---their rage would take over, and men from Ft. Pillow, to Poison Springs would pay the ultimate price for freedom. No protocol would be followed, no quarter would be given to those men, and on that fateful day in Arkansas, many of the men of the 1st Kansas Colored would become martyrs in their own fight for freedom.

[For a useful reference on the treatment of black soldiers, and understanding of the emotional reasoning behind these events, this following work is recommended as a guide to understanding the motives behind massacres at places like Poison Springs, Ft. Pillow, Saltville and others:
Urwin, Gregory J. W. “‘We Cannot Treat Negroes… as Prisoners of War’”: Racial Atrocities and Reprisals in Civil War Arkansas.” In Civil War Arkansas: Beyond Battles and Leaders, edited by Anne Bailey and Daniel Sutherland. Fayetteville: University of Arkansas Press, 1999]


For the remainder of the Civil War, Remember Poison Springs became the battle cry of Black soldiers, on the western frontier. 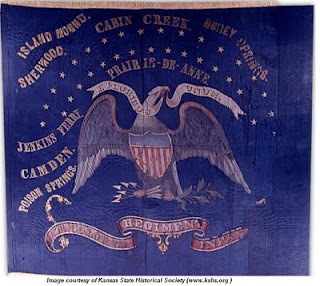 DESCRIPTIONS OF WHAT HAPPENED AT POISONS SPRINGS
EXCERPTS FROM THE OFFICIAL RECORDS OF THE REBELLION: 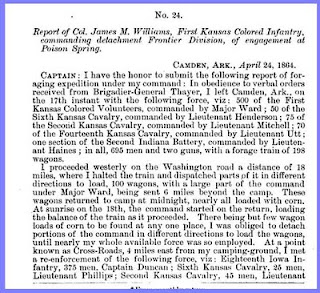 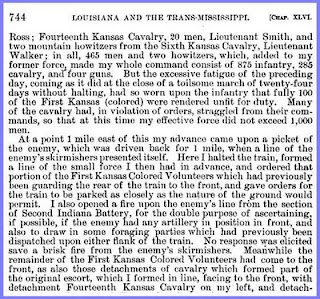 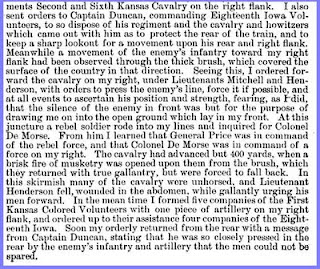 Description of the Kansas Colored at the battle: 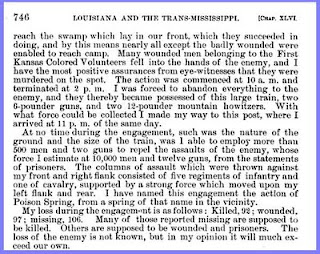 These excerpts were taken from: 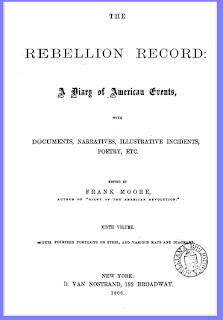 A few months later this battle cry was heard at Jenkins Ferry.  I have an ancestor who died  after receiving wounds the Jenkins Ferry Battle. He served with the 2nd Kansas Colored, (later known as the 83 US Colored Infantry). Being part of an ambulance corps from the 2nd Kansas, he would most likely have heard that Poison Springs battle cry from his comrades, though as fate would have some of them to fall to the enemy, that battle cry would be heard for the remainder of the war. And although my ancestor lost his life in the battle, the greater battle for freedom was still won. And as I think about him, I honor the battle cry that propelled him, for I also remember those from brave men the 1st Kansas Colored who paid the ultimate price on this day, April 18th 1864.
Today, I remember Poison Springs!
Posted by Angela Y. Walton-Raji at 8:18 AM