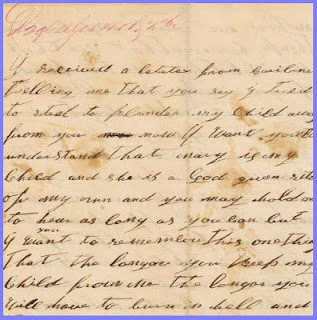 Portion of Letter From Spottswood Rice to Former Slave holder Kitty Diggs
(Click on image to see digitized image of original letter)
Source:
The letter above was written by a father whose concern was the status and freedom of his daughter. His name was Spottswood Rice and he had left the estate of Benjamin Lewis in Howard County, and made it to the Union line not far from Glasgow Missouri. Months later, as many slaves were making a break for freedom, and many were striving to reunite their families, Spottswood Rice had made such an effort. His daughter Mary, however, was still enslaved.  This remarkable letter illustrates the determination of a strong willed man whose spirit was never broken by the yoke of slavery.

The slave holder was Mrs. Kitty Diggs. The wife and children were held by the Diggs family, and it appears that when he wrote the letter, he was still struggling to obtain freedom for his daughter Mary. He begins his letter with a strong and stern warning to the woman holding his daughter in bondage.

"I received a leteter (from Cariline telling me that you say I tried to steal to plunder my child away from you now I want you to understand that mary is my Child and she is a God given rite of my own and you may hold on to hear as long as you can but I want you to remembor this one thing that the longor you keep my Child from me the longor you will have to burn in hell....

Wow---such powerful words. Spottswood had found freedom and had enlisted in the 67th US Colored Infantry in Glasgow Missouri.

But the letter from Spottswood Rice to the slave mistress is one of the more forceful letters that I have ever seen.  This letter was recently shared in one of the communities on Facebook for African American genealogists. Everyone who read the letter and commented about it was truly amazed by its tone and everyone, including myself immediately embraced this man for his spirit and determination to be with his family again. From his service record (above) it is noted that he was born in Virginia and was by the time of the war, a mature man in his late 30s. Having been born in Virginia and ending up 30 years later in Missouri, suggests that he could have already had a taste of separation from loved ones. Slaves lived and died at the mercy of their slave holders, and often loved ones were removed, sold, and kept from each other for years, and in some cases for life.

What a surprise to find a copy of a bill of sale pertaining to Spottswood when he was a young lad, being sold from one man to another slave holder Benjamin Lewis in Howard County, Missouri. This unxpected document was actually included in his military service record. This transaction took place in 1843. 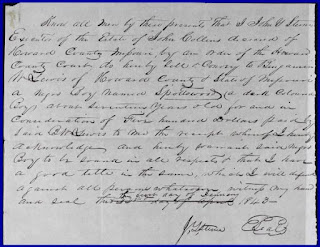 It is possible that the slave holder was compensated for "allowing" Spottswood to enlist.

One must remember that although it was a slave state, Missouri did not secede from the Union, so slavery was quite legal.

However, by the time this letter was written---he was a man in freedom, who was now demanding the freedom of his daughter Mary, who it appears was still being held.

.......that the longor (sic) you keep my Child from me the longor you will have to burn in hell and the qwicer (sic) youll get their (sic) for we are now makeing up a bout one thoughsand (sic) blacke troops to Come up tharough and wont to come through Glasgow and when we come wo be to Copperhood rabbels (sic)....

There is a possibility that Spottswood may have been freed before enlisting in the Union Army. He stated in the letter that he had tried to purchase his child Mary but Kitty Diggs had refused his offer.

"..........my Children is my own and I expect to get them, and when I get ready to come after mary I will have bout a powrer and autherity (sic) to bring hear away and to exacute (sic) vengencens on them that holds my Child you will then know how to talke  to me"

What a surprise to even find a video where part of his letter was re-enacted. 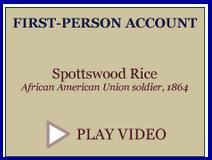 Re-enactment of the words found in the letter of Spottswood Rice
Source: Smithsonian Museum of American History

So after reading that letter I had to know what other details about his life can be learned.
Did he survive the war? Could his Union Army experience be documented further? Did he get his daughter Mary? How long did he live? And what was the nature of  his life?

Well, I was able to learn the answers to all of those questions. But one major part of the story has to be told. Spottswood Rice actually wrote two letters. He wrote one letter to his children and another letter to the slave holder--which I have already discussed. Written on the same day, it appears that Mary, the child cited in the previous letter was a child "left behind".  It also appears that possibly he was partially successful in reuniting his family, and Mary and possibly another child Cora were still missing from the family.

The previous letter written to his children still held by Kitty Diggs deserves to be discussed as well.

[Benton Barracks Hospital, St. Louis, Mo.  September 3, 1864]
My Children   I take my pen in hand to rite you A few lines to let you know that I have not forgot you and that I want to see you as bad as ever   now my Dear Children I want you to be contented with whatever may be your lots   be assured that I will have you if it cost me my life   on the 28th of the mounth. 8 hundred White and 8 hundred blacke solders expects to start up the rivore to Glasgow and above there thats to be jeneraled by a jeneral that will give me both of you   when they Come I expect to be with, them and expect to get you both in return. Dont be uneasy my children   I expect to have you. If Diggs dont give you up this Government will and I feel confident that I will get you   Your Miss Kaitty said that I tried to steal you   But I'll let her know that god never intended for man to steal his own flesh and blood. If I had no cofidence in God I could have confidence in her   But as it is If I ever had any Confidence in her I have none now and never expect to have   And I want her to remember if she meets me with ten thousand soldiers she [will?] meet her enemy   I once [thought] that I had some respect for them but now my respects is worn out and have no sympathy for Slaveholders. And as for her cristianantty I expect the Devil has Such in hell   You tell her from me that She is the frist Christian that I ever hard say that aman could Steal his own child especially out of human bondage
You can tell her that She can hold to you as long as she can   I never would expect to ask her again to let you come to me because I know that the devil has got her hot set againsts that that is write   now my Dear children I am a going to close my letter to you   Give my love to all enquiring friends   tell them all that we are well and want to see them very much and Corra and Mary receive the greater part of it you sefves and dont think hard of us not sending you any thing   I you father have a plenty for you when I see you   Spott & Noah sends their love to both of you   Oh! My Dear children how I do want to see you

Spottswood enlisted in the Union Army near Glasgow Missouri in February of 1864. While in the army, Spottswood suffered an injury and was sent to the military hospital at Benton Barracks to recover. I was quite surprised to find a document reflecting his hospital stay at Benton Barracks in his file. 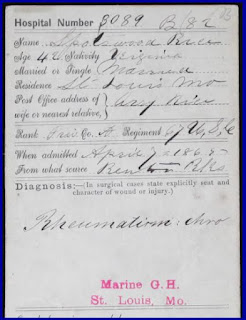 On that document the name of Spottswood's wife was revealed. Her name was Ary Rice.

Apparently, once the men had entered the ranks of the Union Army, they considered themselves to be truly free. By the fall of 1864, Benton Barracks had become a place of refuge--slaves were arriving continually at the Barracks and it became an encampment not only for slaves but for refugee ex slaves who had freed themselves. They were contrabands. Members of Spottswood's family were apparently with him by the fall at including his sons, but his daughters Cora and Mary were still being held by Kitty Diggs.

It should be noted, when husbands and wives were reunited, many of the soldiers wanted to have their marriages recognized and officially recorded.  And Spottswood, was such a man, also wanting to have his marriage officially recorded. And that was when I found a record I never expected to find---I found a marriage record of Spottswood. It appears that while there at Benton Barracks--he and his wife Arry, of many years, who were already parents, still managed to marry officially and have a record made, at long last of their union!

"This is to certify that I joined in marriage October 6, 1864 at Benton Barracks Spottswood Rice and Arry Ferguson, all of  the city of St. Louis, J. P. Ives Chaplain"

I found the document on Ancestry.com's collection of Missouri marriages, and there appear to have been several dozen marriages performed at Benton Barracks during that time, presumably most were marriages of newly freed slaves legalizing their unions as last.


Did he survive the war?

Yes---Spotswood Rice did survive the war, and was reunited with his daughter Mary. I found Spotswood Rice in the 1870 Federal Census in Missouri.

I noticed in the 1870 census that Spottswood had apparently acquired some property as he had both personal property and real estate and the value of his property listed as well. I also noticed that of the persons in the household, in the column that indicated illiteracy of the person enumerated---his line was not marked---suggesting that he was a literate man.

Census form indicated that Spottswood was possibly a literate man

In 1880, Spottswood is living in Missouri with his wife and two sons, daughter Mary, who is now married with her own family. All share the same home on Elliott street in St. Louis.  Spottswood's life has also changed, for he is now listed as a minister by profession.

From this point, records reflecting the life of Spottswood Rice indicate that his life has taken a new direction since the years of enslavement. So--there is so much more to tell.