From Ft. Pillow to Poison Springs - They Were Given No Quarter, but They Died As Men 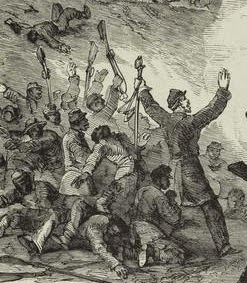 The Ft. Pillow massacre is well documented. The records indicate that when the garrison was attacked and soldiers surrendered, the cry came forth, "No quarter, no quarter". Records also show that most of those who died, were murdered after surrender.

The world soon learned of the atrocities at Ft. Pillow were told worldwide, and the reaction to the massacre brought about dismay and outrage throughout the nation, and world.

Richard Fuchs, author of the "The Massacre at Ft. Pillow noted that even the press carried the story. He quoted a piece from the NY Times:

The blacks and their officers were shot down, bayoneted and put to the sword in cold blood... . Out of four hundred negro soldiers only about twenty survive! At least three hundred of them were destroyed after the surrender! This is the statement of the rebel General Chalmers himself to our informant.

Richard Fuchs, An Unerring Fire: The Massacre At Fort Pillow (Mechanicsburg, PA: Stackpole, 2002), 14.
The national outcry would eventually affect the behavior of Confederate soldiers later that year, for
within the span of a few short months, the same army would later be compelled to no longer massacre black soldiers if they surrendered, but to later take them as prisoners. But the horrors of that day are on record as one of the most vicious of Civil War warfare.

A week later in Arkansas, men of the 1st Kansas Colored were part of a team that were encountered by confederate forces. Several were injured and others left with confederates in pursuit. They gave up the pursuit and returned to the injured soldiers. The Encyclopedia of Arkansas describes the events at Poison Springs:  The Southern troops then turned their attention to the wounded and captured soldiers of the First Kansas; both Union and Confederate accounts agree that many of the black troops were killed after the battle was over.

The attack upon the injured soldiers at Poison Springs, in addition to the brutal massacre at Ft. Pillow immediately became a battle cry for many black soldiers that served in Arkansas after April 1864. "Remember Poison Springs" reminded these men that their fate lay in the outcome of their future encounters with the enemy! They had no choice but to fight harder for their freedom. They took this cry with them later that month, to Jenkins Ferry. "Remember Poison Springs!"

These men are to be remembered for the odds were so strongly against them. They could not shudder and theirs was the choice---to live or die. Theirs was the choice for enslavement or freedom. They may have been enlisted as slaves, but they died free as men.

From Ft. Pillow, to Poison Springs and later to Jenkins Ferry---these freedom fighters shall not be forgotten! 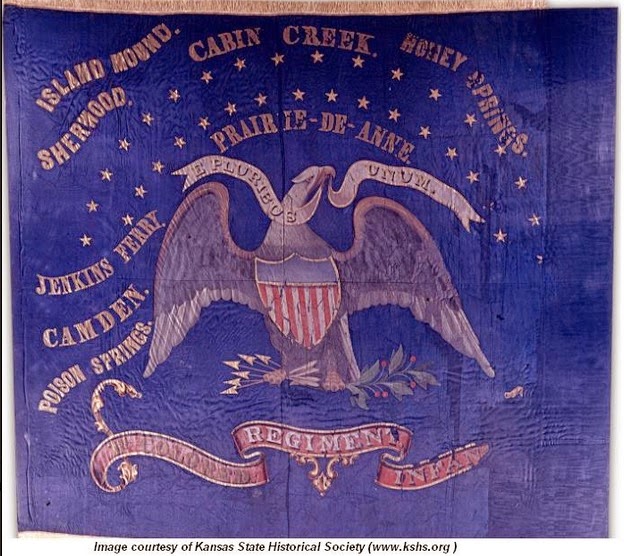 Battle Flag of the 1st Kansas Colored. (Later re-designated as the 83rd US Colored Infantry) 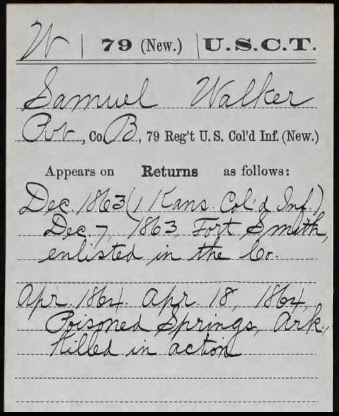 Document from Service Record of Soldier Killed at Poison Springs