Approaching Dardanelle and the Actions at the "Lotus" Steamer 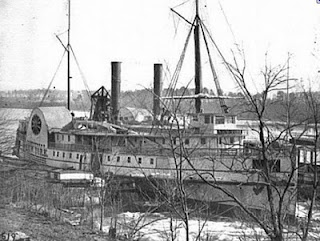 
About 270 plus men had disembarked from the flotilla and had occupied the earthworks at Dardanelle. A Confederate force led by Col Brooks led a group over 1500 soldiers to attack the earthworks. However, Union soldiers had placed two large artillery directly along the two roads that led into the town. The southern forces had only 1 artillery piece and engaged the Union soldiers for about 4 hours before retreating as the Union forces had a better angle and an advantage with the additional artillery

The flotilla made it to Ft. Smith and had to return towards Little Rock, but this time at Ivey's Ford they met resistance again from the same forces under Col Brooks. The New Chippewa was run aground, and set afire, capturing about 40 refugee slave families as well as white refugee families. 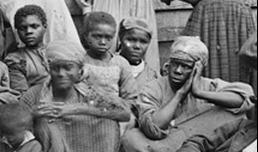 Image of a Refugee Slaves Taken During Civil War

It is important to understand, that as Union forces moved into a new area, it was common for refugee slaves to flee towards the Union line, and in some cases near rivers, which were navigated---they hoped to be taken aboard and given refuge. In this case on the one ship that was hit most heavily, several dozen slaves, newly freed were taken on. So close to freedom, but oh yet so far!!

The remaining boats were fired upon, but they thankfully the 83rd US Colored Infantry, was there, in addition to 54th Arkansas Colored Infantry. (Not affiliated with the 54 Mass).  It is not known if those boats had take on slaves for refuge, or not.  It is known that the colored soldiers defended the boats and was able to fend off attacks upon the Lotus. After two days they arrived safely in Little Rock, the capital.
Though the war would come to an end within 3 months time, by this time, the 83rd (once part of the Kansas Colored) were seasoned fighters, having seen action, in Missouri, Arkansas, and Indian Territory. Their involvement with protecting the Lotus Steamer was mild in comparison to the major battles in which they had been engaged before that time.

Source of information: The War of the Rebellion: A Compilation of the Official Records of the Union and Confederate Armies. Series 1, Vol. 48. Washington DC: Government Printing Office, 1890–1901, pp. 11–17.