The Marching Song of the 1st Arkansas Colored 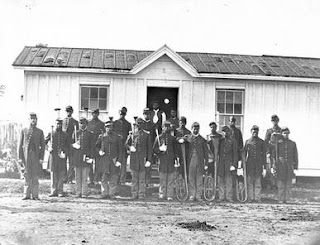 Image of 107th USC Infantry
African American Civil War Musicians
Source: Library of Congress
When one thinks of the Civil War a certain kind of music comes to mind. The music has a certain cadence and rhythmic quality of its own. The fife and drum and buglers are all images and sounds that come to mind and a good number of images of fields Civil War musicians have been found, including those of black musicians as well. It is not known how or whether the song from the flutes or the rhythm of the drums affected the soldiers themselves.
But the many songs that were set to music, did the soldiers ever sing them?
I was surprised however when I learned that there was a black Union regiment out of Arkansas that had its own song.  Known now as the Marching Song of the 1st Arkansas Regiment, African Descent  the song was written down by Captain Lindsay Miller, who said that the men he commanded, used it to march with while on parade.
Set to the melody of the Battle Hymn of the Republic, the song does indeed have a certain appeal and the locals from the enslaved community have to have moved to hear the soldiers sing it.  That in addition to seeing their own men in uniform had to have injected a mighty note of pride and hope for those who were truly on the edge of freedom. The song was overheard by others outside of the regiment and the encampment and permission was given to publish the song.  The Union Army had engaged in a large  push to recruit black men, and this song was approved by the "Supervisory Committee for Recruiting Colored Regiments"
The song appears below: 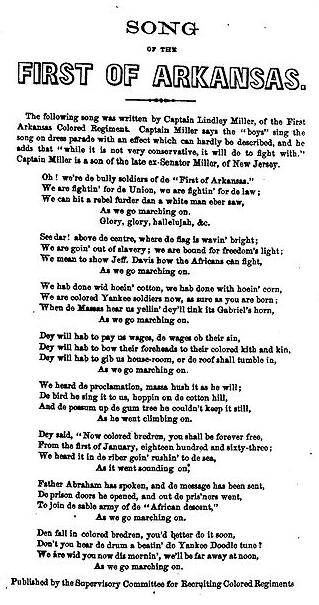 Here is a brief history of that unit:
1st Regiment Infantry (African Descent)----This unit was organized in Arkansas at large May 1, 1863. Attached to Post of Milliken's Bend, Louisiana, to November 1864. Then to the District of Vicksburg, Mississippi.
SERVICE--Moved to Lake Providence, La., May 8-10, 1863, thence to Goodrich Landing and Post duty there until January, 1864. Skirmish at Mound Plantation June 24, 1863. Lake Providence and Mound Plantation June 28. Action at Goodrich Landing June 29. Duty at Haines Bluff, District of Vicksburg, until May, 1864. Designation of Regiment changed to 46th U.S. Colored Troops May 11, 1864.
Source: Compendium of the War of the Rebellion, by Frederick Dyer
Finding the lyrics to this song was quite a treat and it is one of those tidbits from the war, that should be passed on.
If the lyrics are said aloud, one can almost hear them sing..........
....... We are going out of slavery; we're bound for freedom's light;
We mean to show Jeff Davis how the Africans can fight...