The USCT Chronicle --150 Years Later Getting the Story Right! 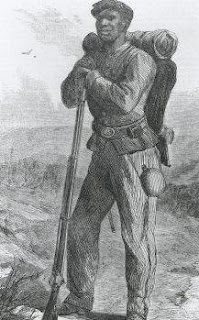 It would be two years before the establishment of the United States Colored Troops, however, by researching my own ancestors I found incredible stories that centered around the Civil War, so the war in its entirety--from its beginning in 1861 is important. In addition, it is time to tell the story, and to quote a genealogist whom I respect---to get the story right!  Well, part of getting that story right----is this fact, the Civil War took place, because the freedom of a race was at stake.

From the perspective of those who were enslaved----there was no other issue except freedom.  Some speak about the war being over a concept of "state's rights."  The enslaved had NO rights--so state's rights had no meaning to them.  But freedom meant everything!!! And for my ancestors that was the purpose and it was the result. To state otherwise is to malign the intelligence of a people, the integrity of an oppressed people, and to deny that they possessed the simplest aspect of their to live freely and with dignity.

When the war ended---my ancestors became free.  My own ancestors had a role, in that war as soldiers, as civilians and those who remained enslaved during the war years, they were affected by the war, and their freedom resulted from that war.

Most importantly-----there are STORIES that came from that war!  That is why I have created this blog --as  a platform to tell those stories.

In the past 20 years, I have documented 9 ancestors who served in the Union Army with the United States Colored Troops. I have identified others who were simply survivors of the war, of the era, and of the times.

Among some of those stories:

I learned and wrote about the story of my gr. gr. uncle, Sephus Bass of Giles County Tennessee, a soldier who enlisted in the 111th US Colored Infantry, and who survived, slavery, mustered into the Union Army, was captured by Nathan Bedford Forrest. More remarkably he and his brother and his two sons  escaped and later rejoined his regiment when they re-organized in Nashville.

I learned the story of my ancestor Lydia, a woman in Crawford County, Arkansas, who married John Talkington, who had joined the 2nd Kansas Colored Infantry, that was later re-designated as the 83rd US Colored Infantry.  John would die in the battle of Jenkins Ferry, but Lydia lived to tell her story, of life as a slave, her marriage to John, and I was fortunate to read her words and others who spoke in detail about her life before and after Freedom. 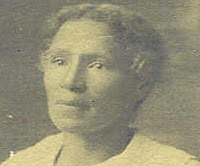 Lydia Talkington
I learned of another ancestor Amanda Young, of Ripley Mississippi, whose husband and son joined the US Colored troops, and whose father was one of the civilians that followed the troops when the Union soldiers raided Tippah County. I thank God for that raid!!!!

Following the Union Army when the raid came through the area, meant freedom at last! Though my Amanda lost all of the 3 men in her life that were so dear, I also learned how she found her sister, after 50 years of separation---a sister who spoke about life in the Contraband Camp at President's Island, when the fleeing slaves left Tippah in search for Freedom. I was amazed to see how this woman had the courage to remarry and find family life again. From that research, I found new cousins in the Barrs, and Reeds.

Ironically, if you go to a search engine like Google, and search for Tippah County, Civil War---the only thing you find is info on soldiers in the confederate army. Amanda's family is not reflected (yet!). Nothings exists to tell the stories of the hundreds of black soldiers who enlisted in the Union Army from the same area!  These are stories of men who had previously been enslaved and who seized their own freedom the moment the chance came. Thankfully, I have found some of them, and have learned some of their stories, and one of my goals is to tell some of the missing stories of the Black Union Soldiers from Tippah County Mississippi, from Giles County Tennessee, from the states west of the Mississippi, Arkansas, Kansas, and Indian Territory.

I also want to tell the stories of those refugee slaves who had the courage to flee from the people who held them once in bondage, to the contraband camps to breathe free air!  These were people who lived in different states and counties and who were enslaved with different circumstances affecting their lives.

They all had heartbreaking losses that slavery brought to millions of people--but they also survived, against the odds.  I want to tell some of those stories

So-----this blog begins!!!!  Join me on this journey to document those untold stories and to get the story right!!!
Posted by Angela Y. Walton-Raji at 4:26 PM